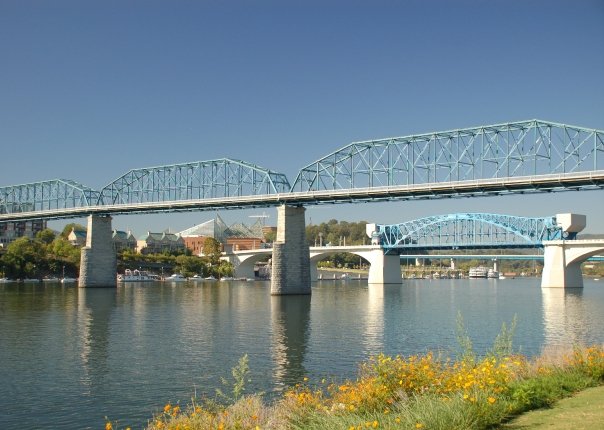 I used to spend time on the river. No, not like that. I don’t own a boat or a place on the river. I listed and sold homes on the river, and one in particular was on the Tennessee River, just before the gorge, so I used to have to drive down there regularly. But I am not complaining – time on the river is time on the river, if you like that sort of thing. And I do. The river is different than the lake. It has a sense of power, of ancient times, a kind of mysterious force that compels you to stare at it, much like a campfire without the smoky aftertaste. The river offers a lushness, full of life, from the jumping fish to the eagles that are searching for them. I could sit there all day – if it were within my budget.

My first river was the Neckar, a tributary of the Rhine in Germany. I was quite young the first time I saw it, but an adolescent the last. The Neckar flows through old Heidelberg and if there is a more picturesque river city, I can’t imagine it. The huge old hulk of the original castle still looms over the river and an equally ancient turreted bridge still crosses it from the old town center. The hills would remind you of East Tennessee (maybe why I like this area so much and the rumored reason why the Germans picked this area for their new VW plant). The two times I lived there add up to half my childhood and they were grand times. We often travelled throughout Europe and we crossed many rivers, but I was always glad to see the Neckar. Every year there was a special celebration to remember the burning of the castle in medieval times and we would sit on a hilltop vantage point at night to watch the fireworks and red torches light up the bridge and castle.

I could type for days about those idyllic times and the river that ran through them.

My dad did a stint as an Army recruiter in Pierre, South Dakota – a bit of a change after Germany. Pierre was a quiet and gentle town and even as a youngster I had the freedom to roam. I walked to school and through a park that bordered the Missouri River. This would have been the same Missouri that Lewis & Clark followed west looking for the passage to the Pacific. Actually, truth be told, they were looking for the headwaters of the Missouri as the land deal involving the Louisiana Purchase had vague language as to what was being conveyed (read your real estate contracts carefully!) and the goal was to gather up all of the west in one fell swoop. Pierre was a different place, isolated, bitterly cold and swelteringly hot, but full of wonder nonetheless. I saw my first overt racism there – the public pool had designated days for the “coloreds and Indians” after which they cleaned it out for the rest of us. This was also the place I first wore eyeglasses – not a negative at all as it opened a world that I eagerly embraced – the printed page. I was discouraged from playing sports (didn’t want to break those expensive glasses) but was encouraged to read. The family acquisition of a set of Collier’s Encyclopedias forever set my course as an absorber of facts.

Pierre is where I found out that Santa was my dad, learned to ride a bike, and discovered tin-can telephones, all the while the Missouri River running through it.

The ensuing years we bounced back and forth from Germany to Virginia. We ultimately settled in Virginia, near Washington, D.C. And nearby ran the Shenandoah River, where we escaped for weekend exploits of camping and hiking and general shenanigans. We usually camped on the river but one year I bought a canoe, to get a little closer to the Shenandoah, and found out firsthand how much power is flowing past in the seemingly tranquil river. I must admit I was more than a little terrified of the rapids, especially in an open canoe, and after that kept my canoe adventures in the lake. But the lesson was learned – the river is a force, ever moving, following gravity and you are going along for the ride if you enter its realm.

You may want to enjoy the weekends there in the Shenandoah Valley, but know full well the river is in charge as it runs right through it.

I spent my teen years and entered young adulthood near the Potomac River and enjoying our nation’s capitol. I witnessed firsthand war protests in the waning days of Vietnam and experienced the hip Georgetown scene, a hodgepodge of head shops, record stores and more, before the lawyers moved in and priced it out of reach. Seems the river does that – draws in money and evicts those of us without. And nowhere is that more obvious than in D.C., where political power corrupts and even the river tries to run out of that mess we fondly claim is a Democracy. But it turns out this was the most important river in my life after all. After I married Diana we settled in a tiny house on the Potomac, courtesy of the U.S. Navy, and this is where I began my journey as one half of a couple. I first became a parent within sight of the Potomac River, went to soccer practice, hung out with new adult friends, and began to take charge of life.

I grew up as a husband, father, friend – and a river ran through it all.

You will not find a lazier river than the Cooper in Charleston, South Carolina. We spent eight years in the Low Country and that fine city, where the Civil War began (known locally as the Recent Unpleasantness or the Northern Aggression) and formed by two rivers, the Ashley and the Cooper. The Cooper was home to the third largest Navy homeport when we moved there, and the place abounded with Sailors. It was a grand time to be alive, thirty-somethings with kids and more coming. Two of our children were born a hop, skip and a jump from the Cooper. Diana bravely parted company with the Navy to raise the kids and I spent important developmental years in ministry acquiring skills that set my course for the rest of my life. It was a time of change and growth in all areas – emotionally, spiritually, and even physically. I ran my first (and only) 10K – The Cooper River Bridge Run – over that same river. I learned you can’t train on flat low-country ground, and expect to climb the bridge built to clear Navy warships, without a reckoning.

I plodded to the end of that race to downtown Charleston, and felt victorious having conquered the bridge while the river ran under it.

And that brings me back to the Tennessee River. After twenty-five years here, launching all the kiddies out of the nest so they can discover their own rivers, we can claim the Tennessee Valley as ours (Diana is a native after all) and the namesake river has run through it all. The TVA long ago turned the Tennessee River into a series of beautiful lakes but underneath the wide and quiet surface runs the original river, emerging for a few miles between dams. I used to love driving down to my listing on River Canyon because of the stark dichotomy. Here the river is enjoyed by all, regardless of wealth, and my favorite sight is rounding a corner on the tiny road. There is a green vintage single-wide trailer perched perpendicular to and right on the river. Out the back door is a tiny weather-beaten deck with two crusty old chairs. And anyone sitting in those chairs has a clear view of the Tennessee River Gorge, breathtaking to say the least. I am sure that trailer would be worth less in scrap than it would cost to pull it out of there and up River Canyon Road. But exactly 3/10ths of a mile further along is the most expensive home I ever sold. Both have priceless views, albeit one more costly to acquire than the other.

The river runs through the lives of all who dwell there, ignoring the wealth, and offering up its grand view and relentless current to whoever is fortunate enough to occupy the land.

This Tennessee River is likely the last river that will run through my life. I call this place home, at least until I shed this mortal coil. And even then, there is promise of a river:

“And he showed me a pure river of water of life, clear as crystal, proceeding from the throne of God and from the lamb. And in the middle of its street, on either side of the river, was the tree of life, which bore twelve fruits, each tree yielding its fruit every month. And the leaves of the tree were for the healing of the nations.” Revelation 22:1-2

And you know, it makes perfect sense. Rivers run through our lives, bringing us experiences of growth and new challenges. Sometimes they run deep, sometimes they are wide and shallow. Sometimes they are smooth sailing and at other times the rapids are terrifying. And in their running, they wash away our lives, allowing us to put behind what was painful and embrace what is around the next bend. And after all that the river offers life and is a place of peace and healing.

I hope you can look back at the rivers of your life and know what people have discovered for centuries. The rivers flow with power and majesty. The rivers hold mystery and intrigue. And the rivers run through every course and turn of our lives.

And in the end of all things, as we embrace eternity, a river runs through it.